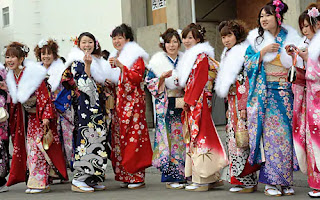 The donning of what we think of as the traditional kimono, began over a thousand years ago during the Heian Period. (784-1185 A.D.). Although today, this garb is rarely seen in every day wear, yet during more formal occasions such as weddings, funerals, and tea ceremonies, these ornate garments are worn. At first the kimono was worn with Chinese influenced Hakama pants. These partially pleated pant like skirts were pulled over the kimono to keep it closed. Later during the period, that changed, and so the Obi was created to take its place. An Obi was a lengthy fabric belt that was wrapped around the wearer to keep the kimono closed. Different manners of styling the Obi tails came into style as well.

During the Kamakura period (1185-1333 A.D.), the kimono was part of everyday wear, and adding multiple layers beneath the main one developed as well. This came into importance because certain color combinations could be worn together to represent a family name or to represent a season of the year. And due to their fabrication, kimonos were very versatile garments that could be worn any time during the year based on the fabric that was used, and the number of layers worn.

Of course with the passage of time, this traditional style began to fade from popularity. This began during the Meiji Period (1868-1912 A.D.), when the layering and not so comfortable sandals became too much of a hassle. During this time, it was encouraged by the government to begin wearing more western styled clothing.

Every since I was young, everything about the Japanese culture drew my attention. From the food, the architecture, and the tranquil nature of the people, it all sounded like a dream come true. Among all of those wonderful elements, nothing has stood out to me more than the kimono. These garments were elegant and classy, while retaining an ancient beauty that caught me eye.

From this love, I began to raid antique malls and ebay, searching for the next gem to add to my budding collection. Presently I only have about 7 or 8, mostly due to cost, and finding space to store them until I can properly display them. Someday, I hope to have them hung on walls or on dress dummies so that others can enjoy one of my passions.

Popular posts from this blog 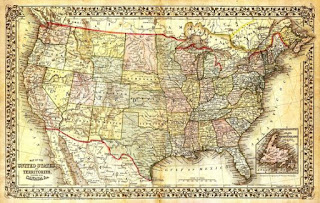 History of The Haiku      For those who are unfamiliar, the Haiku poem is a three line piece with a pattern of 5 syllables, 7 syllables, and then 5 syllables. These poems usually don't rhyme and appear incomplete. This style of writing emerged sometime during the 17th century and one of the more well known poets of the art was Basho (1644-1694). Source: https://iaforhaikuaward.org/what-is-a-haiku/ US State Poems Part 1 Kansas   Tractors plow the fields Golden wheat towering high Yellow blooms shine bright  Missouri An arch rises up, Flourishing by the water. Rivers flow deep blue California Glitz and glamour tempt. A promise of sunshine pulls You under its spell. New York Remember the past Searching for a better life Patriots gather
Read more 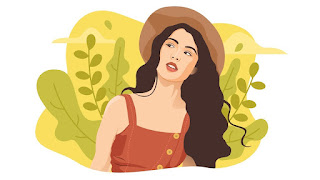 The Art of Illustration      Illustrating images has been a way of communication for thousands of years with the earliest examples discovered in Lascaux, France, where cave paintings were determined to be circa 15,000 B.C. In ancient civilizations such as those of Greece and Italy, art became a major way of life and was used to honor their gods. And let's not forget ancient Egypt where hieroglyphics were used to communicate history, ruling pharaohs and their practices.       "In the Middle Ages, narrative pictorials appeared in illuminated manuscript." During this time, recording religious writings was the main reason for creating detailed images. Of course from there, with the invention of different printing techniques came new ways of displaying images and text for consumer viewing. Then came the profession of being an illustrator. The profession took hold during the 1800s when artists would create small prints to be sold in stalls or small streets shops.  Source: h
Read more

KarelynnASpacek
I am a fantasy author hoping to make a career using one of my passions as the source.